The Edinburgh Club has suffered a grievous loss in the death of George Page. Its energetic secretary, Mr, J. F. B. Wallace, has passed us a document - how rarely is such a thing possible! - which, being a chess autobiography compiled by Mr. Page himself a few years ago, supplies a uniqu Im Memoriam for his multitudinous friends and admires. All that can or need be added, as Mr. Wallace remarks, is that Mr. Page finally won the Championship of the Edinburgh Club for the record number of fifteen times. 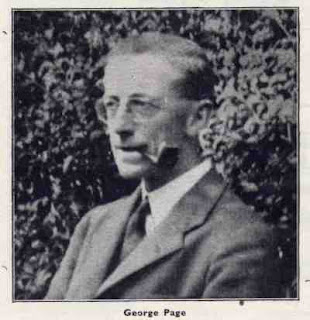 Learned the moves in London in 1908, gave up the game for two years - Civil Service study and exams. Resumed in 1910. Joined West Ham C.C. and in one year advanced in Essex County team from Board 100 to 14. In April 1912, left for Scotland. Have played for Edinburgh C.C., Edinburgh Civil Service C.C. since 1912. Played for Scotland at Wigan in 1913 v. N.C.C.U; had the pleasure of sacrificing my queen and a win. Won Scottish Championship in 1925. Was a member of the Scottish International teams at Folkestone, 1933, and Stockholm, 1937.

In 1925 concentrated on assisting Edinburgh Civil Service C.C. and have played top board for them since that year in all matches, in several seasons scoring 100% in League, Richardson Cup and friendly matches. Rejoined Edinburgh C.C. in 1932-3 and have won the Championship of that Club each year since, nine times consecutive and counting 1923-24, 11 times out 12 years (did not compete 1925-32).

Have given many lectures, blindfold displays and simultaneous perfromances for propaganda purposes. The high light of these occurred in 1926 when at the request of the Royal Scots Club I undertook to play up to 40 players drawn from all the Edinburgh Clubs. A very strong 38 actually turned up and in 2.25 hours I won all but 5 with 11 draws; as was my custom I tossed for the move at each board and came rather badly out of that. My friends Serjeant and Riah calculated that I played at the rate of 550 moves per hour! Simultaneous play comes easy to me as I've always had a flair for fast and more or less accurate play; even in Scottish Championship and International matches the clock never worries me.

My interest in problems has run practically concurrent with the game. In 1908 I discovered the Chess Amateur and avidly read it each month until it gave up. Thereafter B.C.M., Chess L'Echiquier and Problemist have become familiar friends. Composition with me is spasmodic and generally depends on my critical faculty being aroused by somebody else's efforts. Of recent years I've had little time to devote to this pursuit but still solve regularly. Having composed problems I put them in my file and forget about them! Some years ago my friend Stewart got a hold of my file and found 70 unpublished and with my permission got busy to rectify the situation: Chess Editors must have wondered if a rival to Shinkman and Kipping had come along.

In composition I am quite catholic in taste athough if at all possible I try to get a tricky or thematic key move. Indeed many quite good compositions have gone to W.P.B just because the possible keys jarred on my sense of fitness.

I have composed 250 problems, mainly 2-movers and 3-movers, and several have caught the judges' eye in composing tourneys (B.C.F, Max Meyer Memorial, B.C.M., Red Tape and C.A., etc.). The largest number have appeared in my column in the Weekly Scotsman, which I edited from 1926 to 1939 (when war-time restrictions killed it !) I have covered all local and national chess events for the Scotsman since 1920.

So much gives a bare outline of my chess career. I've often been asked why and how did chess come my way. Pure accident. A friend of a friend in my student days in London taught us both the moves. It was early apparent I had a certain aptitude for the game and at the end of the month I played my teacher blindfold and beat him. Prior to learning about chess my game, as the son of a fine draughts player, had been draughts. But chess quite replaced draughts in my affections, despite a more than useful knowledge of the "dam-brod" garnered during my boyhood. I practically ceased to play any indoor game but chess after 1912; straight chess, kriegspiel, four-handed game (my mentor in this was the late G. W. Richmond, a grand player and a great pal) and problems, but in these I've never really become keen on the Fairy type despite my whole-hearted admiration for the King of the Fairies (T.R.D.).!

I did not know that such a thing as a Chess Club existed until 3.5 years after I learnt the moves and probably would never have joined one if I had been able to get opponents socially but in 1911 at the suggestion of a relative I visited West Ham C.C. to see what it was like and to find out whether I could play well enough to join. The sequel was a season and a half of keen play against all sorts of opponents in London and Scotlan; 30 years of continued support for the game in all its aspects. The recruits I've won for the game are legion and of these Mr. J. Stewart, the mistake expert, is not the least. He was always rather keener on problems than I and to him my published work of later years might well be dedicated.

My other interests are Work, Music, Bridge, Gardening, Golf. Used to play Hockey and Tennis but a broken wrist plus Anno Domini stopped these activities. Golf in war time has been superceded by A.R.P duties !